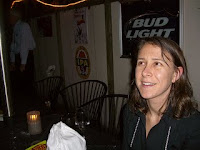 I am looking forward to the next couple of weeks out of the DTC Genomics community.

IMHO, they were not that impressive at the IOM/National Academies meeting.

In fact, I came away with some significant questions which I am certaim the IOM will have as well.


First and foremost, "Tell me why you aren't practicing medicine"

No one here wants to stifle progress. But we don't think you need to break a dozen eggs before you get your omelette.

You would figure someone who had gotten a seat on the Board of the Foundation for the National Institutes of Health would have figured that one out.

Yes, that is correct.

She sits on the foundation board for the NIH!!!!

Once again I am amazed!

My Hypothesis is this.

Francis Collins has never come out abashedly against this type of testing. Why? He needs a Phenome Genome Metabolome study that can be run via the web. He is friends with Kari Stefansson, who knows how to do this. And NOW it appears Anne is on his Foundation's board. What a seriously crazy coincidence............

I do wonder what it takes to sit on that Board. My guess is that you have to have billions of dollars.

Because that is about all she has. B.S. from Yale (yeah, that and a 2.50 will get you a cup of joe), Company founded by her with her husbands money. But it is notable, that this young woman wields quite a bit of power now.

My guess, 23andme Francis and the NIH will sponsor the largest personalized medicine project to challenge the Coriell Personalized Medicine Collaborative.

Barack Obama will need a good will piece like this to erase the banter of health care and it will make everyone see how future oriented he is.

23andSergey win by getting access to the data, NIH wins by leveraging a huge tool which previously had stunted most large cohort studies, President Obama wins by changing the topic to something a little less controvesial (Unless you are an Eschatologist.....)

This will probably be announced in under a year.

The Sherpa Says: Yes 23andSergey, Drew was right, you will probably outlast all others because of your shear wealth. That doesn't make it right, or ethical, but in Washington it is what it is........

Labels: 23 and me, drudgereport, Helix Health of Connecticut, navigenics

This wouldn't surprise me in the least.

in other news, George Bush was responsible for 9/11

conspiracy theories are the best!

@ Anonymous,
Awww....come on Van Jones. Stop bugging me with that Truther stuff.....can't you see I am only interested in Personalized Medicine???

The cumulative burden of irrational and dark maneuvering has left but one option - it's time to resign, pack up, cross borders, go off the grid. I suggest investing in canvas, since sail will be the only viable means of transportation when our civilization goes belly up. In a hundred years they will still be muttering, "What ... were ... they ... thinking ???"

Red,
It is clear here. Money talks, ethics, science and concern for public well being walks.....