I'm All for Change, But this? 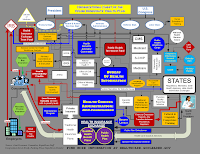 I hope you can get a deep understanding of how absolutely and completely worse off we will be with this complicated system. You can say, "well can't the US government track submarines underwater while also tracking missles overhead and STILL collect taxes?" They can, but this is even more complex. Listen, it would be nice to have a cheaper Not For Profit system out there to pay for care.

It's having access to health insurance. I don't know if anyone reads Investors Business Daily, I do and on Wednesday I read something which almost made me $h!t my pants. The House bill went public all 1018 pages of it.....

From IBD (Not to be confused with Crohn's Disease)

Congress: It didn't take long to run into an "uh-oh" moment when reading the House's "Health care for all Americans" bill. Right there on Page 16 is a provision making individual private medical insurance illegal.

When we first saw the paragraph Tuesday, just after the 1,018-page document was released, we thought we surely must be misreading it. So we sought help from the House Ways and Means Committee.

It turns out we were right: The provision would indeed outlaw individual private coverage. Under the Orwellian header of "Protecting The Choice To Keep Current Coverage," the "Limitation On New Enrollment" section of the bill clearly states:

"Except as provided in this paragraph, the individual health insurance issuer offering such coverage does not enroll any individual in such coverage if the first effective date of coverage is on or after the first day" of the year the legislation becomes law.

So we can all keep our coverage, just as promised — with, of course, exceptions: Those who currently have private individual coverage won't be able to change it. Nor will those who leave a company to work for themselves be free to buy individual plans from private carriers.

From the beginning, opponents of the public option plan have warned that if the government gets into the business of offering subsidized health insurance coverage, the private insurance market will wither. Drawn by a public option that will be 30% to 40% cheaper than their current premiums because taxpayers will be funding it, employers will gladly scrap their private plans and go with Washington's coverage.

The nonpartisan Lewin Group estimated in April that 120 million or more Americans could lose their group coverage at work and end up in such a program. That would leave private carriers with 50 million or fewer customers. This could cause the market to, as Lewin Vice President John Sheils put it, "fizzle out altogether."

What wasn't known until now is that the bill itself will kill the market for private individual coverage by not letting any new policies be written after the public option becomes law.
The legislation is also likely to finish off health savings accounts, a goal that Democrats have had for years. They want to crush that alternative because nothing gives individuals more control over their medical care, and the government less, than HSAs.

With HSAs out of the way, a key obstacle to the left's expansion of the welfare state will be removed.

The public option won't be an option for many, but rather a mandate for buying government care. A free people should be outraged at this advance of soft tyranny.

Washington does not have the constitutional or moral authority to outlaw private markets in which parties voluntarily participate. It shouldn't be killing business opportunities, or limiting choices, or legislating major changes in Americans' lives.

It took just 16 pages of reading to find this naked attempt by the political powers to increase their reach. It's scary to think how many more breaches of liberty we'll come across in the final 1,002.

This is crazy. If this becomes law, it in essence will prevent you as an individual from changing plans, unless of course you go on the government plan. No more individual policies.......EVER

This may not be a big deal for someone in bad health, but for a health 40 year old who wants access to specialists without issues or waiting periods, this could soon become illegal......

The Sherpa Says: If you think that these changes will enable Personalized Medicine, think again.........Besides, the real costs in this system are drugs and hopsitals. Why bother with the providers?