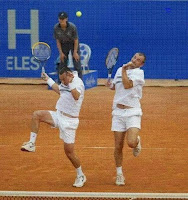 Ok, So I have to get something off of my chest.

Has anyone heard of a segmental NF patient?
No?
Maybe because you have never done clinical work?

What about the fact that even Monozygotic twins have different CNVs and epigenetic changes?
That's new to you too?

Well, HOLY $H!T is this gonna rock your world.

Blood cells and cells in the Aorta have different SNPs!
Wow!

""The usual dogma is that your DNA is the same all over the place," senior author Morris Schweitzer, an endocrinologist and lipidologist with McGill University and the affiliated Lady Davis Institute for Medical Research at Montreal's Jewish General Hospital, told GenomeWeb Daily News. But, he said, his team's work suggests that isn't the case."

Do you mean that I could have different SNPs in my spit than in my brain? Yes!

Now what about in my blood and in my sperm? Yes again!

This is the thing I love about all these simpletons out there.

Just because we have different genetic material doesn't make the research bull$H!T. The associations are there, we just may not know exactly what the hell they mean. Nor may we actually find a pathway just because of SNP tests and GWAS.......

To ascertain true disease cause we need disease tissue, plain and simple. That has been the problem whcih has plagued psychiatric and alzheimer's genetics for years.......

I can see it now "23andSergey Research Revolution" Sign up for this GWAS where we biopsy the brains of depressed people.

It wouldn't exactly meet IRB standards, which is why I think Sergey's Angels could be the only people to pull that one off........

But seriously, what I am taken a back by is the fact that all of these purported genetic experts are suprised that SNPs are different in different tissue types. In what world would that NOT be the truth?

Maybe a world that Venture Capital was pitched to, but that ain't reality and it may not even be that big a deal.

BUT, a lot of "Smart" people have been misled if they actually assumed that SNPs were stable between tissue types.....

The Sherpa Says: A little bit of clinical work would go a long way for the people in the lab.......

epigenetic differences and even CNV differences in twins are one thing - their origins can be explained.

but variation at the DNA level between different tissues? how does that come about?

maybe you could enlighten the ignorant with some background info on that?

Instead of ranting about "simpletons," why not explain how often this occurs (by "this" I mean variations in SNPs in different tissues of the same organism). I'm just a lowly layperson, but I'm interested. I thought mosaicism was rare.