PHG Foundation and my point. 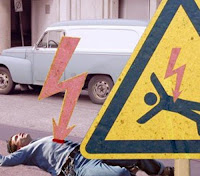 A long time ago I had a post entitled "Beware Doctors Bearing Genetic Tests" back in April of 2007. It was an interesting post where I point out that this wonderful GI doctor who was IVY league trained completely hashed genetic testing for HNPCC.

I went on to explain the shortcomings with Internists in interpreting APC testing for familial adenomatoid polyposis coli. 1 in 3 misinterpret tests.....Wait till you see the DTC interpretation!

Everyone who gets all in a huff when I say that these DTC genetic tests should be regulated. But I am here to say there is a good reason for it, and it has nothing to do with the people getting the tests.......There is now threat of public harm.....

But first let me explain my frustration. Saturday I was on Twitter and Daniel MacArthur and I had a conversation, which he lead off by saying:

"@helixhealthct Just shows how arbitrary most medical care is anyway; not like it'll change the outcomes much.2:46 AM Aug 22nd from TweetDeck in reply to helixhealthct"

Among the 1880 physicians sampled, 42% were aware of the tests(DTC Genetic tests) and, over the past year, 15% had at least one patient bring the results of such a test to them for discussion. Interestingly, of this latter group, 75% (212 physicians) indicated that the results had changed some aspect of their patient’s care.

So it had me begging several questions.

1. Did the physician read the Terms of Service for the DTC test? "Not to be used to make medical decisions"

2. Did the patient read the Terms of Service when they brought this test to the physician.

3. How is the physician supposed to know that this is not a clinically validated genetic test?

4. How is the busy clinician to differentiate this test from other clinically valid tests?

5. Why did the patient bring the test to the doctor? Was it due to DTC marketing efforts?

I was pissed at Daniel. How dare he say what we as physicians do changes no health outcomes!

In some instances he may be right. In others I wondered how complaints may actually be neglected based on this "genetic test"

Did these 212 doctors know something I don't about the utility of this DTC testing?

I am seriously concerned that the 3/4ths of the 18% had actually changed care based on a non-clinical based test. That, to me is Scary AS HELL!!!!!

Think on this for a second.....How many of these doctors will ignore chest pain complaints based on a low genetic risk?

Now think on this. How many doctors will unnecessarily order stress tests for patients who have no complaints and are "High Risk"?????

Either way you slice it, 3/4 of these doctors are acting incorrectly, or at least not according to evidence base.

This survey proved one thing to me. Doctors have no F^CK!n& Clue what they are doing with genomics!

I think it would be interesting to know exactly what changes were made and based on what genetic results. Without that information it's hard to comment on the possible harm being caused...or not. If one change was ignoring a chest pain because the genetic test said low risk, then yes, harmful (and probably says something about the quality of care that patient is receiving anyway...). If the change was "add extra omega-3 to your diet", or "increase your physical activity", because of SNPs related to inflammation or insulin resistance then probably not much harm.

Yes,
I totally agree. Knowing the alterations would be key. I some series with other genetic tests, they did include gross improper counseling and even neglect of some screening regimens. So I am fairly certain this could be some of the same bungling......

Tough to say for sure, but there is a possibility for harm nonetheless....

Even CoQ10 can screw with medications and fish oils can make platelets less sticky leading to bleeding although not nearly as effective as Plavix......

Thanks for drawing attention to this interesting study. I agree with your point as well as the first commenter's qualification of it.

I think this in part underscores the need to better educate physicians (starting at the medical school level) in genetics and genomics.

I recently wrote an article and blog post to this point for PLoS Medicine. I would be interested to hear your feedback...

Perchance ye may hear said rejoinder: Methinks thou art cross that yon equine has vacated thy barn for yea this past fortnight. Ye Kings' Big Pharma and DTC dukedoms do find this a risible state of affairs.

Bulls are bovine, not equine.